2 Wineries and Vineyards for sale in DO Penedès

Cava winery with farm in DO Penedès.

Winery with a large capacity for cava production in DO Penedès with a lovely farm and large area of land.

Luxury wine resort with 12 bedrooms and a spectacular spa, located in a country house surrounded by vineyards. 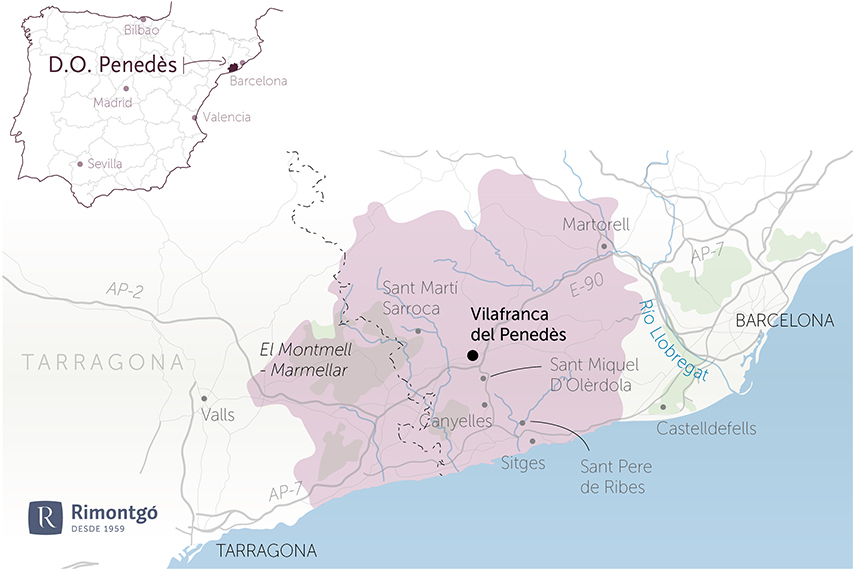 Vilafranca del Penedès is the main wine city in this Designation of Origin, which is extended over the south of the province of Barcelona, but also flows over into some stretches towards Tarragona. There are three clearly marked-out areas: the lower Penedès (Baix Penedès)is the coastal area, which is elevated up to 250 metres; the central part (Mitja-Penedès), which constitutes the main production area, with a rippling countryside and altitudes of between 250 and 500 metres; and the most inland Penedès (Alt-Penedès), at 800 metres, with a small, very high quality production.

The soils in the three areas are similar: rich in phosphorous, low in potassium and with an average of 20% limestone in all of the area. In the lower land, the majority of the soils are sandy. As the altitude advances, the limestone surface areas are expanded as chalk. And in the end, in the higher areas, the clay predominates over the rest of the materials.

The Designation of Origin Penedès benefits from a Mediterranean climate, with a yearly average of 14 °C and average rainfall of 525mm per year. The Tramontane moves towards the area, whilst the Sierra de Montserrat protects it from the winds of the North. The summers are hot and the winters are gentle. However, with such a varied cultivation land, there are many microclimates, which offer the opportunity to grow a varied selection of vines.

From 1970 they started to experiment with new equipment and cold fermentations, the producers of the Penedès have created excellent modern wines which mix native varieties with French varieties. The diversity of the landscape allows there to be over 121 grape varieties. The main white ones are those of the production of Cava, Macabeo and Xare.lo, as well as Chardonnay, Parellada and Malvasia. The experimental white grapes are French and German varieties in order to make dry and dessert wines: for example, Muscat Blanc à Petits Grains, Riesling and Chenin Blanc. The seven authorised red grapes are Tempranillo, Garnacha Tinta, Cariñena, Merlot, Cabernet Sauvignon, Monastrell and Samsó. It is also a traditional area of cava production and, since 2013, the weight of the quality sparkling wines, produced under the brand Clàssic Penedès, has increased.